How To Choose The Right Font For Your Design 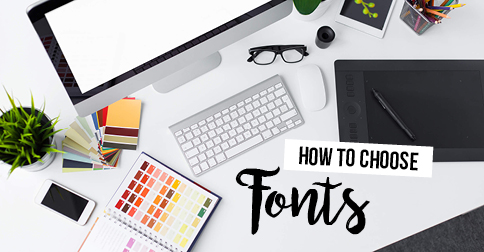 18 Aug How To Choose The Right Font For Your Design

Posted at 10:19h in Digital Design by andrew

Choosing the “right” font for your design can play a big part in how well your designs will be perceived. Below we have compiled a list of things to consider when choosing font for your next design.

Every designer has some amazing outlandish typeface that they use for special occasions. However, 95% of the time you are designing, you’ll need to use safe and clean typefaces.
It’s better for a typeface to be clear and legible, rather than so unreadable that it distracts from the overall communication goal of the design. If someone has to spend an extra 4 seconds to understand what has been written, then they will disregard your entire design.

Some safe sans-serif typefaces you might consider starting with are Arial, Impact, Lucida Grande, Tahoma, Verdana, and Helvetica.These fonts are more than likely already available to you and will display on the web with no issues (they’re what are known as “web safe fonts”).

These five classifications of different typefaces are the 20% that are used in 80% of today’s writing and content.
This is not a comprehensive list of all available typeface classifications, but it is start and will help get you moving towards picking the right typeface.

Geometric Sans is a combination of three different groups (Geometric, Realist, and Grotesk), but for the purpose of this article, there is enough commonality between them to group as one classification. This type family of sans serif typefaces are based on strict geometric forms. The letters are often uniform in width and focus on a “less is more” aesthetic in their design. Geometric typefaces are often classified as clear, objective, modern, and universal. On the flipside, they can be said to be cold, impersonal, and boring.
Examples of Geometric/Realist/Grotesk Sans: Helvetica, Univers, Futura, Avant Garde, Akzidenz Grotesk, Franklin Gothic, Gotham.

Known as the “oldest typefaces”, Old Style is marked by little contrast between thick and thin, and curved letter forms tend to tilt to the left. These typefaces are often classified as classic, traditional, and readable.
Examples of Old Style: Jenson, Bembo, Palatino, and Garamond.

Created in the mid to late 18th century, Traditional and Modern typefaces emerged as an experiment in making letterforms more geometric, sharp, and virtuosic.
Transitional and modern faces are often classified as strong, stylish, and dynamic. They are also said to be too conspicuous and baroque to be classic, and too stodgy to be truly modern.
Examples of transitional typefaces: Times New Roman, Baskerville. Examples of Modern serifs: Bodoni, Didot.

Slab Serif have become more popular in recent years. They have a stroke similar to those of sans faces but with solid rectangular shoes stuck on the end.
Slab Serifs are unusual in the world of typography; designer Dan Mayer says: “Slab Serifs are an outlier in the sense that they convey very specific — and yet often quite contradictory — associations: sometimes the thinker, sometimes the tough guy; sometimes the bully, sometimes the nerd; sometimes the urban sophisticate, sometimes the cowboy”.
Slab Serif can be known as urban or rural, generally standing out in the wrong surroundings but fitting perfectly in in the right places.
Examples of Slab Serifs: Clarendon, Rockwell, Courier, Lubalin Graph, Archer.

There is a good rule of thumb that you can use in your designs – the two typefaces should have at least one aspect in common. Even if they’re still different, this tip will help determine whether the two might look elegant together or not. Some similar aspects to look for are: 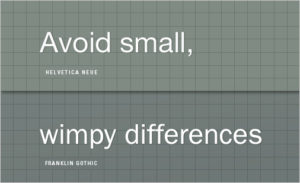 4. Bonus Rule For Choosing Fonts: ‘There Are No Rules’

These principles we have just mentioned are merely guidelines to help you pick the right typeface. As you build your own skills in selecting typefaces, you’ll develop your own set of rules about choosing type. Despite many would have you believe, there are no “wrong” or “right answers”.

It’s up to you to determine how you want the viewer to feel when they look at your designs, and it’s your choices the can reduce friction and bring delight to your designs.